The Bunn Velocity Brew BT does a fantastic job of offering up all the essentials that a java lover needs and skimming the fat so that you’re not bogged down with features that you’re less than crazy about.

The Bunn Velocity Brew is impressive in its brew time and no-nonsense setup. However, we’d be remiss if we didn’t mention the main event – how does a cup of coffee taste when its made in this beauty?

Consumers opinion: The Bunn Velocity Brew BT earns an average rating of 4.6 out of 5 from more than 3,152 Reviews on Amazon. A lot of us probably grew up with one of those old coffee makers that don’t offer anything in terms of looks but you could count on it to reliably do one thing: brew a cup of coffee. The coffee that it brewed wasn’t necessarily the best coffee that you’ve ever had, and it wasn’t the worst, but it got the job done.

The Bunn Velocity Brew BT brings some of the old school charms back into brewing coffee in the form of a machine that doesn’t offer anything in the looks department. It’s got kind of an oblong shape, it doesn’t offer a clock or additional knick-knacks.

That’s because the Bunn Velocity Brew BT focuses on the main event: the coffee. Despite its unenthusiastic design, it can still create a delicious cup of coffee in a little under 4 minutes.

It has the operating power that’s usually assumed of higher end, fancier looking coffee brewers but it’s more likely that the Bunn Velocity Brew BT outperforms a lot of the flashier models that we see in stores.

Open up the box

Let’s get into what you can expect from the Bunn Velocity Brew BT when you pull it out of the box. It’s a larger machine, definitely not what you’d expect if you’re more used to a Mr. Coffee or smaller brewer that sits on your countertop.

You could argue that the bulk of the Bunn’s design is pretty modest, it will take up a considerable amount of counter space.

The performance of the Bunn Velocity Brew BT is pretty no frills, which is perfect for a no-frills kind of person. You’ll fill up the water reservoir, plug the machine in, put in a Bunn paper filter and hit the only switch on the machine. The brewer will provide a full pot of coffee in a little under 4 minutes.

Additionally, the machine is pretty forgiving when it comes down to getting the coffee ratio correct. There are some machines that will provide the perfect cup of coffee if you get the ratio right, and these same machines could give you a cup of coffee that’s too strong or lacking in flavor if you mix up your measurements by a tablespoon or so. This machine only asks for about one to two tablespoons of coffee per cup, which should yield a good cup of coffee every time.

Another perk of the Bunn Velocity Brew’s brewing ability is that this machine knows how to get hot. As it brews your coffee, the machine shoots to 195.7 degrees Fahrenheit in around a minute or so. The inability to get scorching hot can ruin the potential of a perfectly good coffee maker, some models of the Keurig have struggled to hit that scorching hot temperature in the past so that there could be an emphasis on design and convenience.

However, your favorite coffee blend is meant to be enjoyed after it’s been brewed at that high sweet spot. Keep in mind that the best temperature to brew coffee at is between 195 degrees and 205 degrees, so the Bun Velocity Brew gets high marks in this category!

Lastly, not only does the Bunn Velocity Brew prepare a perfect cup of flavorful coffee in under 4 minutes, you can rely on the brewer to be ready for you to come back for more for hours afterward. This brewer might be a perfect companion for an office kitchen- its simple albeit clunky design might appear to your superiors while the actual blew keeps things all business. Besides, who wouldn’t want to enjoy piping hot coffee in between being hunched over spreadsheets and counting the hours until the weekend?

Although the brewer can brew a full pot of coffee within 4 minutes once it’s turned on, it still needs fifteen minutes when you first power it on to bring the water to an optimal temperature for brewing.

This brewer can hold its own with a diverse array of coffee. You’ll be able to taste the subtle notes of chocolate in your favorite dark and medium blends, or the juicy notes in some of your African or South American blends.

This emphasis on bringing out the subtlest flavors of your coffee, the efficient brew time, and the easy to clean parts are the features that coffee lovers can look forward to, especially when they’re confronted with a few of the Bunn Velocity Brew’s flaws.

Emptying out the tank that easies also cleaning the tank isn’t fun either. Both are much more time consuming than cleaning a standard coffee pot. Needs frequent cleaning – the machine catches anything and everything from your water, the best way is to use purified water.

Designed & Assembled in the U.S.A.! The Bunn Velocity Brew BT has a round silver tank and is offered in Black and White.

The brewer doesn’t come with an automatic timer, a clock, an LED screen, or additional buttons. It’s possible that we’ve been spoiled by competitor’s machines that offer all of these to us, but for the price of $130, it seems that it should come with a few fixtures that make it feel like you’re using a deluxe coffee maker.

Bunn-O-Matic Corporation is a manufacturer of dispensed beverage equipment – coffee and tea. The company was founded in 1957 by George R. Bunn Jr., who invented the flat-bottom fluted coffee filter and the pour-over drip coffee brewer. The company is still privately-held and family-owned with the present CEO – Arthur H. Bunn.

We haven’t found a perfect coffee machine yet and the Bunn Velocity Brew is no exception. For all of its perks, it still has a few flaws that you’ll want to keep in mind before you hit the stores in search of one:

GETTING TO KNOW THE CONTROL PANEL

We could firmly envision the Bunn Velocity Brew in a busy office or in a home with one or more serious coffee drinkers. This machine is a no-nonsense, serious coffee brewer that needs a user to match it.

If you’re really expecting the frills that might come with a Nescafe, Keurig, or Braun coffee maker, then you’re going to want to turn in the other direction.

We’ve been convinced that we need coffee makers to do five other things in addition to brewing a pot of strong, flavorful coffee and the Bunn Velocity Brew BT is a great way to get back to basics because it prioritizes the most important aspects of coffee making: 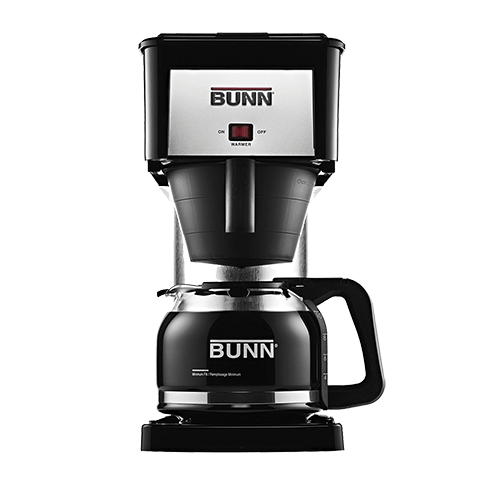 Your browser does not support images upload. Please choose a modern one

What people say... Leave your rating
Order by:

Be the first to leave a review.